They say that flirting is an art form.

Someone who is too forward and upfront may scare the other person off. Too subtle can come across as shy or inattentive. Learning proper flirting techniques is key to getting your message across effectively. Similarly, avoiding common flirting mistakes is important in developing your technique.

Flirting, in its most basic form, is just another way for people to interact. It all boils down to showing a genuine interest in another person. It can get intricate, however, when you reveal the intent behind flirting.

In our Flirting Techniques section, we examine basic flirting techniques and how you can use them to your advantage.

Sometimes one person has romantic intentions, while the other person wants to remain strictly platonic. Misunderstanding flirting techniques can lead to uncomfortable situations. You need to be able to express yourself effectively, especially when it comes to more sensitive scenarios like online dating.

We also discuss topics like where you’re going wrong with online flirting, how to have a spicy long-distance relationship and how Facebook has helped flirts.

Learn to flirt in any situation with our how-to guides, ideas for date nights, online dating tips and more, browse our complete list of articles under Flirting Resources.

What Flirting Signals Is She Sending You, If Any? 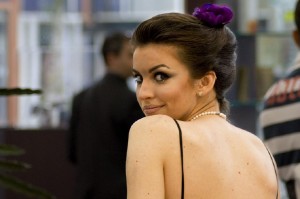 Women are a mysterious breed and it has to said, it can be so difficult to know what they mean, and I’m saying that as a woman. Any man will be familiar with the situation where he asks his other half if she is okay, to be told “I’m fine”. Of course the guy knows that everything is so not fine, but he has no clue what he did wrong. Somewhere along the way the guy has missed some pretty important signals that his special lady is seriously peeved.

Does That Belong To You?

We have all been there at some point, out on a social occasion with our other half only to be confronted with someone openly flirting with your partner. It could be someone in your own social circle that consistently approaches your partner in group outings to cop a quick feel of what is yours.

Not only is it poor form, it is also a totally awkward situation, where people will be looking at you with sympathy and at your partner and their accompanying leech, with absolute horror. So what do you do? Do you just ignore the situation and pretend you don’t see it or do you take action against what is being shoved into your face?

A desperate flit is just that, desperate. Flirting with someone who is already spoken for, in front of their partner is pretty pathetic, attention-seeking behaviour. They want witnesses to see their scandalous acts and nothing would make them happier than a heated confrontation in front of many avid viewers.

If your partner can be trusted, do nothing, they aren’t isn’t a threat to you, only an embarrassment to themselves. If they are a serial flirt, with your partner not being the only unwitting victim and you feel compelled to intervene do so discreetly. Ask the desperado what is going on in private and let them know how embarrassed for them you are.

Read the full story at Newsobserver.com

Guys, you know what I’m talking about. You have been crushing on a girl for months, she seems to be giving you the positive vibes one minute, like a bite of the lip, and the next minute your feeling the chill as she freezes you out with folded arms and a scowl. So you ask you ask yourself the question: ‘Is she flirting with me, or does she just hate me?’

Is it ever possible to know when a woman is flirting with you? Well there is a chance you may never be sure. The woman is a complicated creature and her mating habits are still woefully understood, leaving the less complicated man throwing his hands in the air in exasperation.

But fear not confused men of the world, there are a few signs that indicate a woman probably is interested.

If the girl mimics your body movements, it means she is already in tune with you, it doesn’t mean that she is making fun of you. It may not be wise to test out this principle with some wild arm movements…it’s definitely a more subtle thing.

A woman will become very tactile with a man that she finds attractive, she will use almost any excuse to touch you, and it is usually a touch that lingers. Show your mutual interest by guiding her gently with a hand placed gently in the small of her back.

Be aware of her body language. As cliche as it sounds, when a woman plays with her hair, looks at you from under her lashes and makes lingering eye contacts, she is flirting. The old ways are still the best.

Good luck with your flirting boys!

I Want You to Notice Me

When a relationship first begins, infatuation is the order of the day – you only have eyes for each other and can’t spend enough time together. There is no saying on how long this infatuation will last, but it is an almost certainty that the intensity of the feeling will eventually fade into something more enduring.

However, it is easy to feel under appreciated and somewhat unattractive when the flame doesn’t burn so bright, which can lead to a need for attention. When your sex life is less than it could be and the complements aren’t flowing as freely as you would like, it is so easy to be tempted by the flirtatious co-worker or fit trainer at the gym.

So should you engage in a little flirtation to make your partner jealous, in the hope that they will realize your still desirable?

Flirting with another to attract the attention of your partner is not a wise decision. You could be hoping just to ignite a spark, to instead find your relationship in tatters, following your betrayal.

Relationships are hard work; once the initial excitement has cooled you really do have to learn to be a good partner. Men can find it difficult to remember the importance of the sweet, romantic gesture, while women need to find a way to let the minor gripes go.

Instead of creating another problem in solution of another, talk to your partner and try to get to the root of the issue, the decreased attention. Is your partner insecure or struggling with the status quo of life in a relationship, or are they simply so secure in your relationship that they don’t feel a need to sweep you of your feet…they are just happy to be with you.

It is a problem that many relationships encounter at some point, it just takes a little effort to reconnect…so instead of looking for flirtation elsewhere, make time to flirt with your partner.

It’s time to brush up on those flirting skills as it is officially International Flirting Week between the 17th and 24th of February, and it seems like it is the men who need that little bit of extra practice. While it may be men who are generally expected to initiate the first contact, it’s seems like women are finally turning the tables.

In the UK, US and Canada, it is the women who are taking the lead, being the bigger flirts. However, it may come as no surprise that the only exception, where men outdo women in the flirting stakes, is Italy – every sentence is a line.

It isn’t just the boldness of women that is evolving, it is also the way that they flirt. The days of a girly giggle, flutter of the eyelashes and coy glances are long gone. Now it is all about the suggestive look, banter and a bit of taking the mick.

So what should you be avoiding when flexing your flirting muscles this week? Well the men should avoid being personal space invaders, as this is a big turn off for women. And women, don’t offer to lend the object of your desire money…it is a big hit to a man’s feeling of masculinity.

International Flirting Week may prove to be the perfect way to break some ice…so will you be taking the opportunity?

Five places you would never have thought to flirt!

Flirting is as inevitable as rising taxes, hangovers and growing old (not always so gracefully). If you ask 100 random people where they flirt, the responses will be the stereotypical