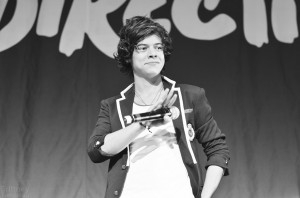 One Direction’s Harry Styles in a notorious ladies man, despite recently admitting that he is fairly sexually inexperienced. No matter his level of experience, Harry just can’t resist a flirt when in the presence of a beautiful lady.

The latest to be wooed by Harry’s charm was Australian presenter of Channel 7’s Sunrise, Samantha Armytage – you may remember she was also recently wooed by Russell Crowe. The 36-year-old presenter met 19-year-old Harry in the backstage area of Melbourne’s Rod Laver Arena where she was to be interviewing the One Direction boys.

Samantha says if the encounter: “When he [Harry] walked in an kissed me on the cheek I though, ‘Oh, hello’. He was very open and talked about women. He did say he didn’t care about age. And there was a lot of flirting from him – and it wasn’t just in One Direction. It went in both directions.”

Samantha revealed that Harry was keen to see her again: “He did invite me for a round of golf. He is far too young. And I’m too old for him. I prefer older men. I’m old enough to be his mother.” Even though she declined the young Lothario’s offer, Samantha was still flattered by the attention, stating it was good for her ego that a strapping young lad was interested.

I bet Harry is not used to getting the brush off, but if he and Samantha had got together, they would join a host of other age-gap couples, like these… 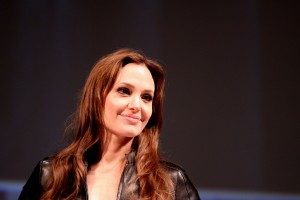 Do you have a preference for older and younger men?