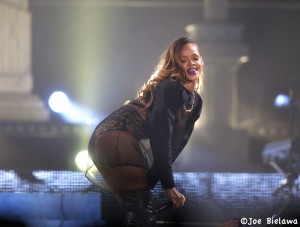 It seems like is hasn’t taken Lewis Hamilton long to get over his most recent split with Pussycat Doll Nicole Sherzinger as he is spotted partying with Rihanna. The pair were seen getting close at Monaco nightclub ‘Jimmy’z Monte Carlo’ when Rihanna pitched up at 3am following her delayed concert in the city.

Lewis only split with fiance Nicole earlier this months amid reports that he wasn’t ready to settle down and this certainly seems to be true if his late night partying is anything to go by. Nicole may be somewhat comforted by the news that there was no obvious touching between the pair, but once Rihanna spotted Lewis she was with him until she left the club.

So Rihanna flirts and Nicole hurts, who will be next in the sights of single gal RiRi…lock up your men ladies!

Rihanna Flirts to Get Over Chris Brown?

The ongoing saga of Rihanna and Chris Brown continues, with the pair once again splitting up this week. Rihanna dumped Chris Brown once again, after he ditched her ‘Diamonds’ concert in New York’s Brooklyn to go partying in Harlem instead.

It hasn’t taken Chris very long to move on, allegedly hanging out with another one of his exes, Karrueche Tran. However, there was no way Rihanna was going to let Chris Brown get one over on her. Apparently, Rihanna has been having some of her own, flirting and partying with an ex of her own, Basketball star JR Smith.

To get over her most recent break up with Chris, Rihanna headed to trendy New York night spot Greenhouse with her girlfriends to dance and party the night away. Also in the club, was another one of RiRi’s bad boy exes, Knicks player JR Smith, celebrating a recent win against the Celtics.

According to a source, Rihanna was dancing very provocatively in front of JR, as well as, flirting up a storm with him in the VIP area. Before leaving the ‘Umbrella’ singer stopped by JR’s table to give him a kiss and lingering hug. So are things back on for RiRi and her baller, or is this just a way to get back at Chris?

A source close to Rihanna and Chris insists that this latest break up wont last long saying: “They’re just coolin’ it right now. There’s always going to be love there. That will never change. But sometimes it’s better to take a break and get back to the basics.”

Who can guess what is next in the Rihanna and Chris Brown soap opera.

Read the full story on MStarz.