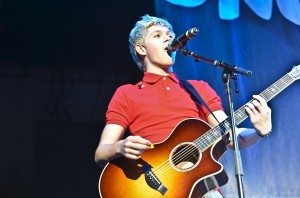 Has Selena Gomez finally had enough of bad boy Justin Bieber and instead found a someone much better for her in One Direction member, Niall Horan. Sick of Bieber being in the news for all the wrong reasons, has Selena decided to say goodbye to him for good and set her sights on the super loveable Niall?

Well according to the latest Hollywood gossip, Selena and Niall have taken their friendship to the next level with some seriously flirty text messages. Rumors of a relationship between the two started circling again recently when they attended a Katy Perry concert together. A source has claimed that since the concert they have been in constant communication saying: “They text a lot and flirt via text.”

The source added: “Selena wants to take things slow, but she’s totally open to the idea of seeing him again. She loves the fact that he’s cool and completely drama-free, not to mention really sweet and thoughtful.”

I think they would make a really cute couple, but I’m not sure the Bieber would agree.